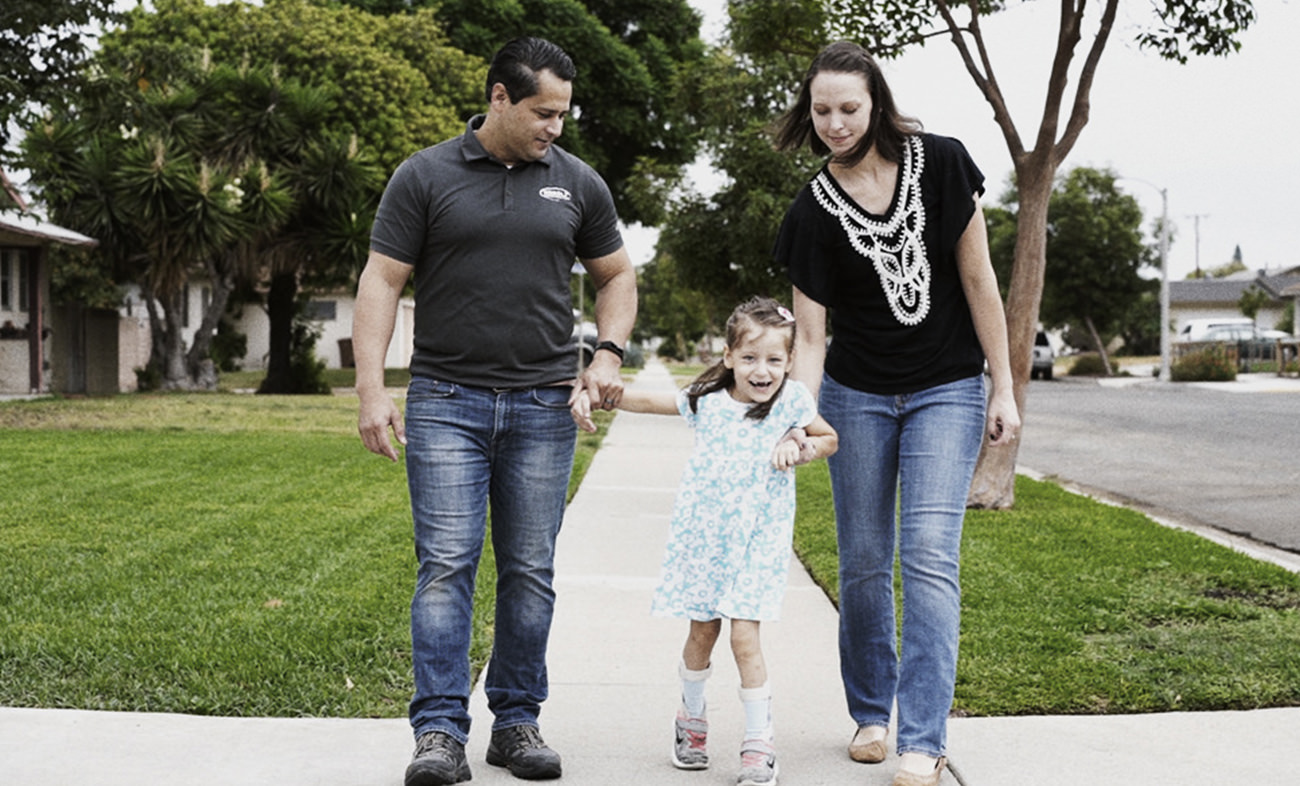 On February 2, 2014, Bree and Nelson Moreno were thrilled to welcome their baby girl Mia into the world. It had been a good pregnancy followed by a normal C-section, with no red flags at birth. Mia’s Apgar scores (which indicate a newborn’s state of health) were all normal.

Like many newborns, Mia cried a lot. She wanted to be held all the time. After a week and a half, she seemed to be getting more and more cranky. When Mia was three weeks old, Bree noticed Mia was sweating a lot, and she was cold and clammy to the touch. When they put her in her crib to sleep, an outline of sweat emerged on the sheet around her body. The pediatrician told her not to worry and instructed her to give Mia a cold bath, but Bree’s maternal instinct told her something was wrong.

By March 17th, Mia’s condition had not improved, and she had developed a fever, so they took her to the closest children’s hospital. The ER providers took X rays and CT scans. Within minutes, they gave Bree and Nelson the news that would change their lives forever.

It turned out that Mia had a large mass in her tiny chest, which was pressing on her heart, lungs, and spine. Bree will never forget the first time she heard the word “neuroblastoma.” The medical providers recommended 8 rounds of chemotherapy, followed by an open surgery to remove the rest of the tumor. “It was surreal,” Bree remembers, “Like a bad dream that turns out to be real.”

On their third day at the Children’s Hospital, Mia was scheduled for two procedures, each requiring her to undergo sedation. First, Mia was transported to the hospital next door for a needle biopsy, where they took out a portion of the tumor for diagnosis. Immediately afterwards, Mia was brought back to Children’s Hospital, and sedated again, so the providers could insert a port called a “broviac” into the area around her collar bone, through which chemotherapy would be administered.

Bree and Nelson were instructed to stay in the waiting room while the port was installed. After about 20 minutes, the head nurse came in, followed by the hospital Chaplain. From the look on their faces, they knew something very bad had happened.

During the procedure to install the port, they explained, Mia’s heart “collapsed,” and her pulse dropped dangerously low. The medical providers were in the process of doing chest compressions, but it had already been 20 minutes. The chaplain encouraged them to pray for their daughter’s life.

Bree and Nelson were in shock. All they wanted to do was see their baby. “We trusted the doctors,” says Bree. “They should have known what they were doing.”

Finally, her heart started pumping again and her parents were allowed back into her room. Her heart had been compromised for almost 45 minutes. Bree recalls, “She looked terrible. Helpless and sad, with leads all over her. She had marks all over her chest, like scrapes, from the compressions. We were happy she was alive, but from that point, it was really touch and go. We didn’t know if she was going to make it or not.”

Later, they discovered that the main medical provider had left the room during the installation of Mia’s port, and that they were not properly tracking her vitals. “If they had been paying closer attention, they could have prevented the cardiac arrest.”

Mia was put on a ventilator for several days until her heart was fully functioning. None of the medical providers would explain why this had happened to their daughter.  Instead, she was moved to the oncology ward to begin treatment for the cancer.

After the first round of chemotherapy, Mia was sick and exhausted. Her parents couldn’t imagine putting her through seven more rounds like that. They sought out second and third opinions. A children’s hospital in a larger city nearby suggested chemotherapy was not needed and instead they suggested laparoscopic surgery to remove the tumor. They transferred Mia to this hospital, and in May 2014, the tumor was successfully removed. Three days later, Mia was already feeling better.

However, over the next several months, her medical providers noticed that Mia was not hitting her developmental milestones. She wasn’t crawling, but rather, would scoot around on her back. Her gross and fine motor skills were not where they should be for her age. After some testing, the neurologist explained that because the oxygen had been cut off from Mia’s brain for so long during the cardiac arrest, the parts of her brain that control movement was damaged, resulting in Cerebral Palsy.

Although Mia’s tumor had been easily treatable, the medical providers’ mistakes and negligence had terrible consequences. She was free of the cancer, but she would now be disabled by Cerebral Palsy for the rest of her life. “She would have been fine, a totally normal kid who can run and play, but they messed up and now she has this lifelong condition. They really changed the outcome for the worst, unfortunately,” said Bree.

Now, Mia is 5 years old. She needs braces on the bottoms of her legs and feet, physical therapy, occupational therapy, and speech therapy. She uses a walker and a wheelchair. “She will need care her whole life,” said Bree. “We will need a vehicle for her wheelchair. Our house is not conducive to her disabilities. She uses a gait trainer for walking. We need to build ramps.”

When Bree and Nelson spoke with lawyers about their case, they found out about a little-known California law called MICRA, which would limit their ability to recover damages for the medical negligence that caused Mia’s disabilities. MICRA was set by politicians in 1975 to limit quality of life and wrongful death survivor damages for medical negligence cases at $250,000. This law has not been updated in 45 years, not even for inflation.

Unless MICRA is changed, Mia will not be able to recover more than $250,000 for her cerebral palsy and for all she has lost in her quality of life. She may never be able to live alone, have a family, or hold a job. “Thinking about what $250,000 meant in 1975, when you think about the value it had then, compared to what it has now, does that seem fair?” Bree says. “Our daughter is going to have a lifetime of disability and will need lifelong care. That (amount of) money is not going to go too far.”

Mia’s dad, Nelson, agrees. “Knowing that there is this cap, this limitation, it’s like having no hope. It’s like a lost cause. You don’t want to give up because that’s what you do as a parent. You fight for your kids. I will fight for Mia – whatever it takes. But it’s very disappointing because no matter what you do, it’s all about politics. It shouldn’t be that way. It definitely needs to change. We deserve better. Mia deserves better.”

5 months ago
by jl

7 months ago
by admin