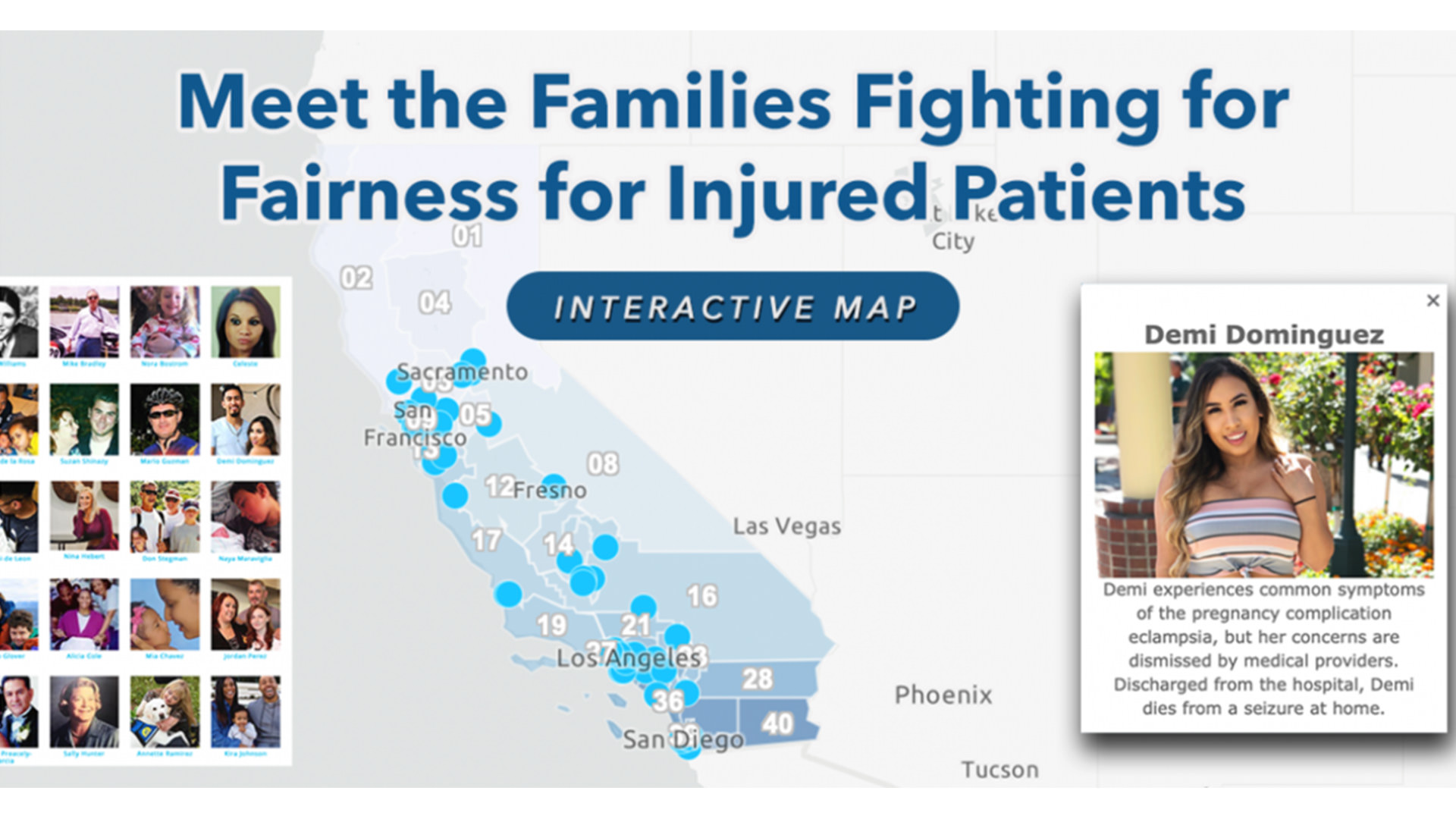 Los Angeles, CA – As California courts and voters confront the injustice of the state’s 45-year-old limits on the rights of medical negligence victims, Consumer Watchdog celebrates World Patient Safety Day on Sept. 17th with the launch of a new website featuring video, photos and an interactive map to tell the stories of injured patients who are fighting for change. They are the force behind the Fairness for Patients Act on the November 2022 California ballot.

The map features more than 55 patient advocates who represent each of the forty state Senate districts across California and have been impacted by medical negligence and the cap on compensation.

Consumer Watchdog is hosting a Facebook Live event on Thursday, September 17th, launching the map and will post a new video featuring a survivor of medical negligence every fifteen minutes beginning at 10AM and continuing throughout the day.

A Full Schedule of Video Releases, and home cities of patient advocates, can be found here:
https://www.consumerwatchdog.org/sites/default/files/2020-09/PatientSaf…

“Families in every corner of California are fighting to restore the rights of patients harmed by medical negligence. We are telling our stories on World Patient Safety Day because they have been ignored for too long in the halls of power in Sacramento,” said Michele Monserratt-Ramos  of El Camino Village, California, who lost her fiancé to medical negligence and is a member of the staff at Consumer Watchdog.  Michele now works with Consumer Watchdog’s advocates across the state to guide them in their pursuit for accountability.

Monserratt-Ramos’ 36-year-old fiancé Lloyd passed away from surgical errors, untreated infection, and sepsis in the hospital by a substance-abusing physician who ignored his deteriorating condition and didn’t offer him the care he needed to save his life. Watch his story here.

Voters will have a chance to restore patient rights on the 2022 ballot by updating the state’s $250,000 cap on compensation in medical negligence cases for inflation, and allowing judges and juries to decide cases involving catastrophic injuries or death. Learn more about the initiative, the Fairness for Patients Act.

A groundbreaking California Court of Appeal decision was published last week that could free medical negligence victims from the cap in certain cases, such as medical battery. In this case brought by a man whose surgeon removed part of his penis without his consent, Burchell v Loma Linda,the Court refused to reduce a jury’s verdict to the cap’s maximum of $250,000.

With movement at the ballot and in the courts, the legislature may be compelled to act to protect patients harmed by medical negligence. Californians visiting the map will be able to contact their legislator and ask them to restore equal justice for injured patients.

While the cap harms all patients, it disproportionately impacts some, including women and people of color. Women earn less and are more likely to suffer injuries capped by the law – like loss of fertility, or the loss of a child at birth. People of color earn less, and are more likely to receive lower quality health care and suffer more medical negligence because of systemic inequalities.

“Updating the cap is a priority for racial justice and gender equity,” said Charles Johnson, chairman of the campaign supporting the Fairness for Patients Act. “Fixing the cap is about fixing a system that does not provide families, most often black and brown families, with a fair day in court when they face gross medical negligence.”

Johnson’s 39-year old wife Kira died during childbirth at Cedars Sinai when her bladder was lacerated during a C-section and her symptoms negligently ignored for 10 hours while she bled out. Black moms like Kira die in childbirth 4 to 5 times more frequently than white moms. Watch her story here.

Scott Olsen of Chula Vista, whose son Steven was only two years old when he was rendered blind and brain-damaged due to medical negligence, is a proponent of the Fairness for Patients Act. Watch his story here.

The other proponents are Bree and Nelson Moreno, from Fullerton, whose young daughter Mia suffered permanent brain damage at a few weeks old when she was negligently over-sedated and left unattended. Watch her story here.

Please view the entire article at the Consumer Watchdog

1 month ago
by admin

June 10, 2019, was a date the Dominguez and De Leon family eagerly anticipated for months. Demi 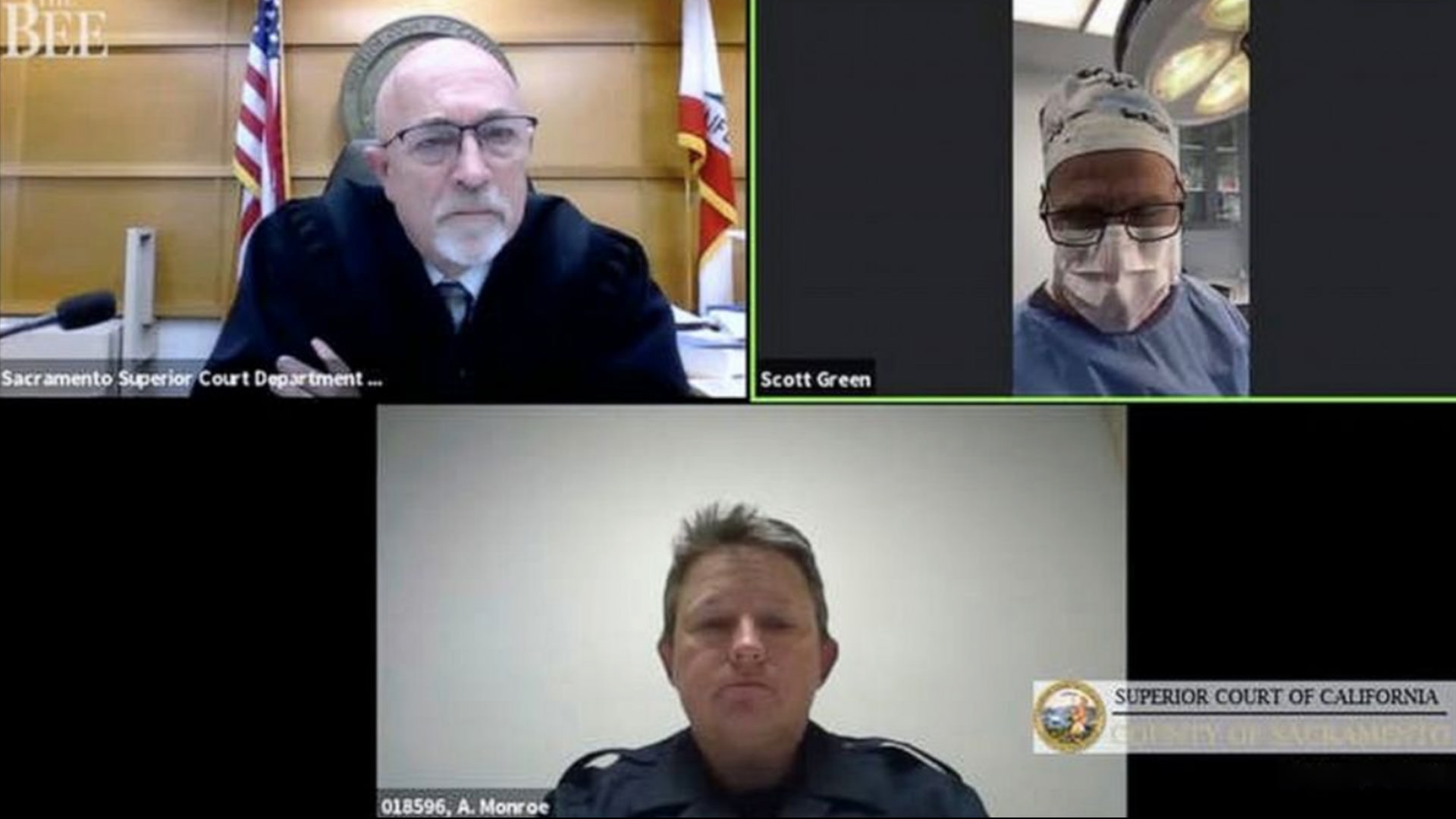 2 months ago
by admin

SACRAMENTO, Calif. -- The Medical Board of California said it would investigate a plastic surgeon who appeared

5 months ago
by admin