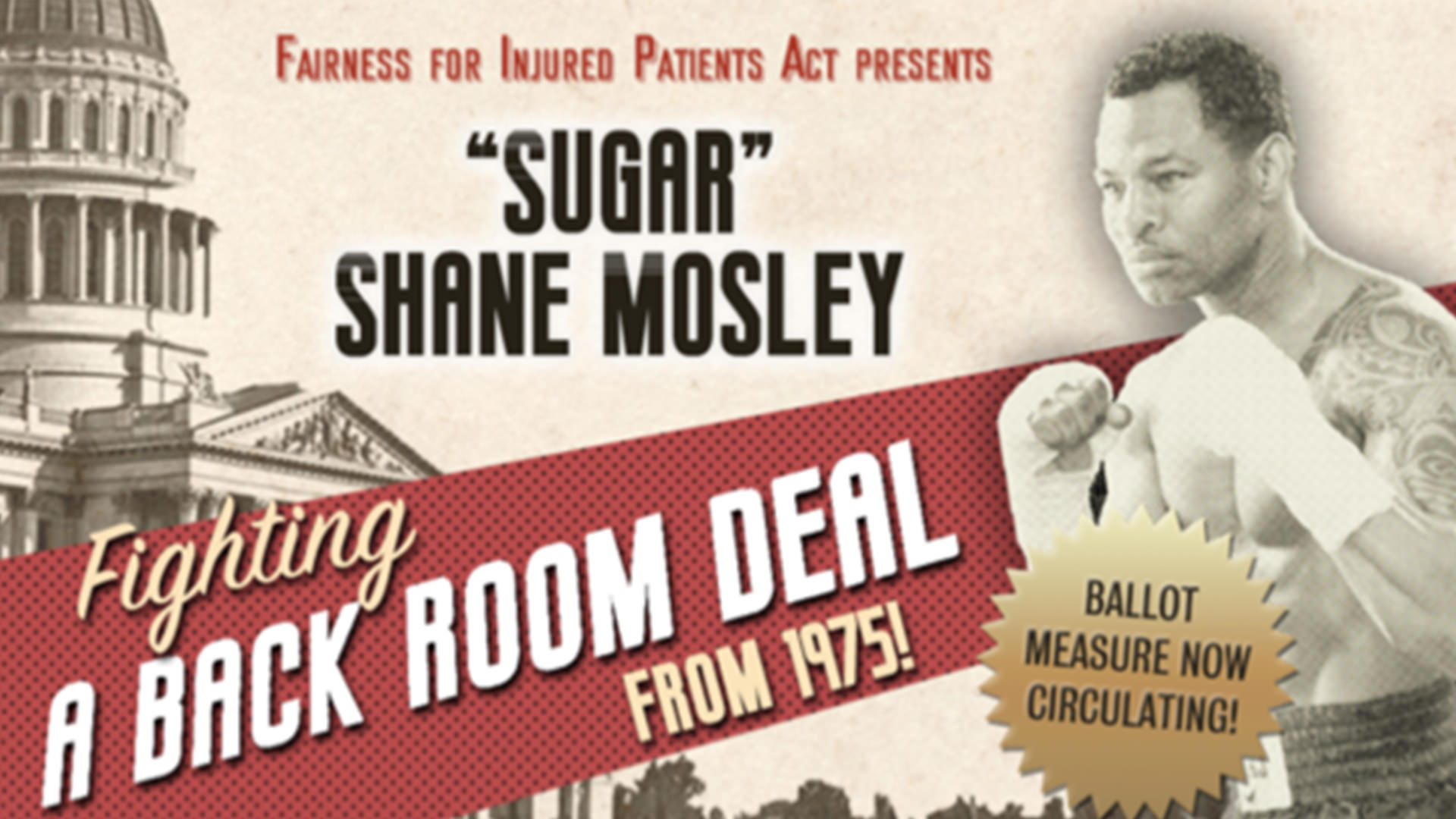 Sacramento, CA — Medical negligence survivors and advocates for a proposed ballot measure launched a petition signature drive for the Fairness for Injured Patients Act (FIPA), which will adjust the compensation cap imposed on injured patients by Sacramento politicians in 1975 that has never been adjusted.

Juries are not told of the cap and injured patients cannot receive more than $250,000 for their quality of life and wrongful-death survivor damages, no matter how serious the injury or severe the medical negligence.

The backers will need to submit 623,212 valid voter signatures by the beginning of May to qualify the measure for the November ballot. Voters would then vote on whether to adjust the 45 year-old compensation cap for inflation and allow juries and judges to decide cases of death or permanent disability without the cap.

California has the lowest medical negligence compensation cap in America, along with Montana and Texas. 33 other states either have no cap or exemptions for death and catastrophic injury such as those proposed by FIPA.

The proponents, two families whose children were injured by medical negligence and suffer from cerebral palsy, were joined by other survivors, including boxing great Sugar Shane Mosley.

US Senator Barbara Boxer, Christine Pelosi, and advocates from the nonprofit group Consumer Watchdog joined the call for change to the 45 year-old law.

Shane Mosley revealed that he will never fight again due to an elective surgery that went awry. A surgical instrument burned the nerves in his forearm nowhere near the surgery site and ended his ability to box professionally.

“I can’t fight professionally anymore because of medical negligence, but I will be fighting for the Fairness For Injured Patients Act to win civil rights back for California patients and families that insurance companies and politicians took away in 1975,” Mosley said.

The survivors and advocates launched the effort at Frank Fat’s, the famed Sacramento eatery where a 1987 detente among legislators and interest groups including the 1975 compensation cap was written on the back of a napkin. The so-called “Napkin Deal,” which still hangs on the restaurant wall, followed the cap being declared constitutional and typified the backroom dealing that has prevented any adjustments to the compensation cap in 45 years, the group said.

It is long past time to adjust the cap for pain and suffering in medical malpractice cases,” said Senator Barbara Boxer (retired). “I have carried this issue in my heart for many years since I met victims who never had a fair chance to recover equitable damages because of some back room special interest deal.”

Read a letter from Barry Keene, author of 1975 malpractice cap, on the law’s passage, the Napkin Deal, and how the cap harms patients: https://www.consumerwatchdog.org/sites/default/files/2019-12/BarryKeeneReply.pdf

The survivors and advocates said patients have been denied fair compensation and juries have been kept in the dark under the 1975 law. FIPA requires that juries be told about the cap, which it indexes for inflation to approximately $1.2 million.

Scott Olsen’s son Steven was denied a CT scan when he was two years old that would have saved him from blindness and cerebral palsy. Olsen, of Chula Vista, is one of two official proponents of FIPA. He spoke out at Frank Fat’s with his now 28 year old son Steven by his side.

“For his lifetime of blindness, and cerebral palsy, a jury gave Steven $7 million for his lost quality of life and lifetime of disability,” said Olsen. “At trial, when the jury left the room, the judge slashed that $7 million verdict to just $250,000. The Fairness For Injured Patients Act will prevent what happened to us from happening to other families.”

Bree and Nelson Moreno are the other proponents of FIPA. Their daughter Mia’s heart stopped during a medical procedure because she was negligently over-sedated when she was just a few months old. She now lives a life of cerebral palsy, has very little control over her body’s movement, and will require lifelong care.

If the Fairness for Injured Patients Act is enacted in the November 2020 election, then the jury that decides Mia’s case will not be limited by the $250,000 compensation cap because she has permanent brain damage and cerebral palsy.

“The jury in Mia’s case should be free to make a full decision that addresses her life-long injuries that is not overridden by the one-size-fits-all compensation cap set 45 years ago by politicians in 1975 and never adjusted,” said Bree Moreno. “My daughter’s quality of life and future shouldn’t be determined by an arbitrary 45-year-old compensation limit that doesn’t apply in other states.”

Charles Johnson’s 39-year old wife died during childbirth at Cedars Sinai when her bladder was lacerated during a C-section and her symptoms ignored. She bled out.

“This is about making sure that families who have suffered unimaginable tragedies receive the respect, dignity and accountability they deserve,” said Charles Johnson. “I am honored to be a part of this fight.”

Johnson’s mother Judge Glenda Hatchett, who has had two television shows, joined her son at Frank Fat’s to speak out for FIPA.

Trista Pisani talked about how she had lost twins in childbirth because of medical negligence. Due to the 45 year-old compensation cap, she was unable to find an attorney to take the case and hold the medical providers accountable. When a child dies, the maximum compensation available is the $250,000 cap set in 1975.

Nick Rowley, who lost a child due to medical malpractice and is a nationally renowned trial lawyer with over 150 jury trials in states across America, is heading up the fundraising effort for FIPA.

“This unjust law was passed when John Lennon was still alive, President Ford was president and the Vietnam war was just ending,” said Nick Rowley. “Now it’s time for voters to be the jury and do what politicians have failed to do, adjust and update a horribly unjust law.”