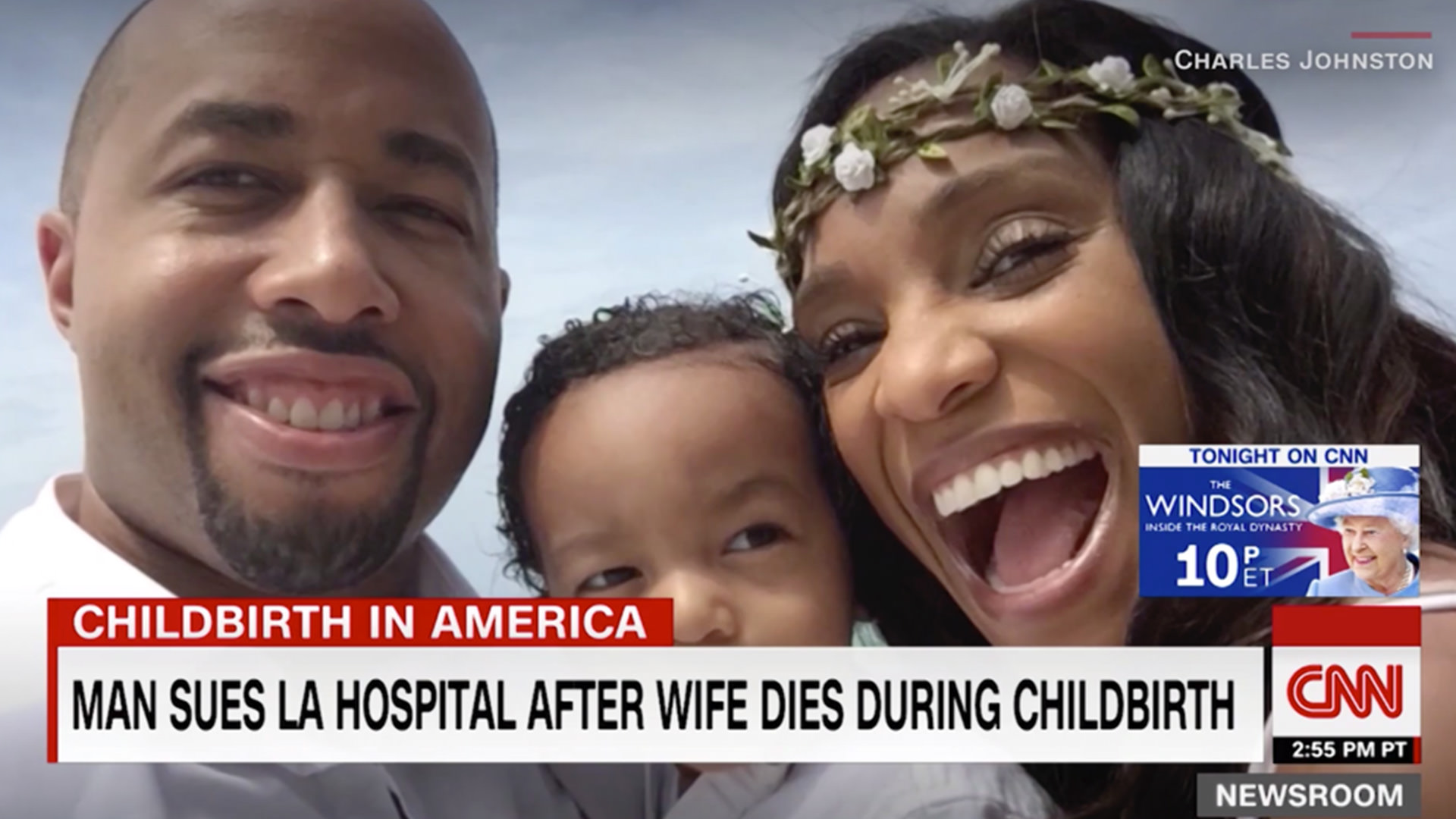 LOS ANGELES — A local man is suing Cedars-Sinai Medical Center after his wife died during what was supposed to be a routine C-section birth.

Charles Johnson lost his wife three years ago, but he is still grieving and still angry when he thinks about that night at the hospital.

“I can see the Foley catheter coming from Kira’s bedside turn pink with blood,” he recalls.

“I just held her by her hand and said, ‘Please look, my wife isn’t doing well.’ This woman looked me directly in my eye and said, ‘Sir, your wife is not a priority right now.’ It wasn’t until 12.30 a.m. the next morning that they finally took the decision to take Kira back to surgery,” Johnson said.

As critical minutes turned into hours, Johnson says he was continually ignored by staff at Cedars-Sinai Medical Center in Los Angeles as Kira’s health continued to suffer.

“When they took Kira back into surgery and he opened her up she had 3 and a half litres of blood in her abdomen from where she’d been allowed to bleed internally for almost ten hours. And, her heart stopped immediately,” Johnson said.

Johnson is suing the hospital for the loss of his wife and with the case pending, Cedars-Sinai told CNN in a statement that they could not respond directly because of privacy laws but that “Cedars-Sinai thoroughly investigates any situation where there are concerns about a patient’s medical care.”

Kira was a successful entrepreneur who spoke five languages.

Video she recorded shows her teaching her first born son to speak Mandarin. This was a woman who could fly planes and sky dive. She was deemed invincible to her family, which is why her death is so much harder to understand.

“I started to do research for myself. I realized, oh my gosh, we are in the midst of a maternal mortality crisis that isn’t just shameful for American standards. It is shameful on a global scale,” Johnson said.

The charity Every Mother Counts, which was founded by supermodel Christy Turlington, works across the world on maternal health – but also in the U.S., because America is the only developed country with a rising death rate for pregnant or new mothers. Approximately 700 women in the U.S. Die each year.

Globally, the comparison is stark. More mothers die in childbirth in America than they do in Iran, Turkey or Bosnia Herzegovina and Kazakhstan. All have lower maternal death rates.

Lynsey Addario is a Pulitzer Prize winning war photographer who has documented deaths of women in childbirth – around the world -in the same way she tackles a war zone.

“It’s almost more heartbreaking because I think when I go to a war I kind of know what to expect,” Addario said.

What she did not expect was to find that her own birthplace – America – was failing pregnant women in some of the same ways that much less developed countries fail their mothers.

“When I go to the United States, I see you know, these little scenes of heartbreak, I just can’t believe they are happening in my own country. It’s almost harder,” Addario said.

Every Mother Counts says many of their deaths are because of an unequal healthcare system and systemic racism.

“There is a failure and disconnect from the people who are responsible for the lives of these precious women and babies to see them and value them in the same way they would their daughters, their mothers, their sisters,” Johnston said.

Now part of an unnecessarily large fraternity of Americans who have lost partners in childbirth, Johnston is pushing for policy changes, raising awareness and trying to hold doctors and hospitals accountable.

“If I can simply do something to ensure that I can send other mothers home with their precious babies. Then it’s all worth it,” Johnson said.

And he’s raising his sons, teaching them about their mother.

“What I try and do is wake up every day and make mommy proud,” he said.

Please view the entire article at CNN and or ABC 7